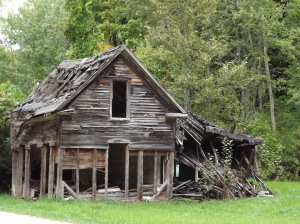 The Forgotten Places of Delaware, Ohio…

Originally posted by Susan Lamphere on October 14, 2014 on DelawareO.com.

According to author and researcher Rick Helwig, there are approximately 8,000 to 9,000 ghost towns in Ohio.  Helwig, the director of the Center for Ghost Town Research in Ohio, spoke to a large crowd during a program put on by the Delaware County Historical Society at the First Presbyterian Church.

Helwig runs the center from his home in Sunbury, and has been at this business for some time.  His father officially founded the center in 1983 after teaching several college courses on the subject starting in the 1970s.  Following in his father’s footsteps, and with research assistance from his mother,  Helwig has continued to study, classify, and document forgotten towns in many of Ohio’s counties.  He identified four different types of ghost towns:  true ghost towns, semi-ghost towns, paper towns, and old towns.

A true ghost town would be a place that doesn’t exist anymore, such as Alum Creek in Berlin Township, Rome in Berkshire Township, or Eagletown in Thompson Township.  Semi-ghost towns would be those in which at least 10% of the population or businesses still existed.  Norton in Marlboro Township, or Olive Green in Porter Township would fall into the semi-ghost town category.  Paper towns were ones that were platted and recorded, but never came to fruition.  One good example is the town of Berlin which would have been located at the intersection of Rts. 36/37 and Sweeney Road.  Old towns would include those that still exist, are over 100 years old, but are a shadow of their former selves, such as Ashley and Cheshire.

Helwig spoke of ghost towns in other counties, such as the town of Pee Pee and Ratsville, which actually had a story about rats attached to it.  He also told the story of the haunted ghost town of Moonville in Vinton County.  Although headquartered in Sunbury, the Helwig family has published many editions of ghost town books for many of Ohio’s counties.  Over time, he updates the books as semi-ghost towns slip into ghost town status, or as new information is discovered.

The Helwig family’s work has been a great resource in local history research, and books are available for sale.  Rick Helwig travels throughout the state doing speaking engagements as well.  There are websites  that reference his family’s work, and you can also find reference books in the Delaware County library.  (A request has been made to update the edition of Helwig’s book on Delaware County Ghost Towns on file in the local history room of the library.)

Helwig’s love of local history spills over to many areas, including Santa Claus and the Civil War.  He will be speaking at the November 20th annual membership meeting for the Delaware County Historical Society when he presents with Henry Shaw about Delaware County and the Civil War.  Helwig will also be the featured speaker at a program on the history of Santa Claus for the Big Walnut Historical Society in November.

For more information on the Center for Ghost Town Research in Ohio, try writing or calling Helwig.  He is listed with the Sunbury Big Walnut Area Chamber of Commerce and is also very involved with the Big Walnut Area Historical Society.