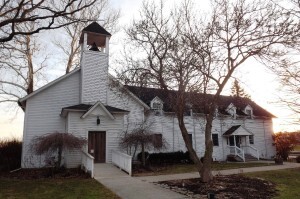 Once upon a time, in 1894, there was volcano.  In Liberty Township.  But more about that later.

Nestled between two rivers, this area of Delaware County does not disappoint.  Our last piece about Liberty Township left off at Hyatts Road and named Nathan Carpenter as the first settler in Delaware County in 1801.  The following year he was joined by Thomas and Sarah Cellar and Josiah McKinnie and their families who settled on 4000 acres in what became known as the Liberty Settlement. The first cabin was on the east bank of the river along Taggart Road. The Olentangy River isn’t that deep, but imagine pioneers making their way from Columbus in a keel boat.    According to descendant T.K. Cellar, the story goes that the men loaded the boat with food and supplies and set out on their journey which turned into a four day struggle.  Meanwhile, the women, children and livestock went on foot and arrived within a day.  And waited.  And waited.  They were pretty hungry by the time the Cellar conch shell heralded the arrival of the boat a few days later.

Cellar was not only a veteran, he also manufactured guns for the Revolutionary War.  The Cellar family was instrumental in the development of the church and the history of Liberty Settlement.  In 1810, the church now known as Liberty Presbyterian Church was organized and the building which still stands today was completed in 1820.  For a time there was a post office called “Union” here as well as a store owned by Joseph Cellar.  The Cellar family history even shows up at the county courthouse, where a historical marker memorializes Thomas Cellar and the “lost hog” incident.

Across the road from the church, Robert McCoy Cellar built the barn and home that were recently torn down to make way for the new Trail’s End development.  Luckily Dan Troth of Friends of Ohio Barns got involved and was able to deconstruct the barn piece by piece.  It has been purchased and will be rebuilt within the township sometime in the near future. Meanwhile, the main road into the development has been named after the Cellar family, and homes that are now being built will be featured in the 2014 Parade of Homes.

Today T.K. Cellar enjoys speaking to kids about pioneer history, and actually has a conch shell which has been passed down in the family.  He has done several presentations to different groups about the Cellars’ legacy in Delaware County and has passed the name Thomas down to his son.

The Case family was also very prominent in the early settlement of Liberty Township.  A small portion of Highbanks park is in Liberty Township, and here you will find a historical marker recognizing their family history.

David Thomas, Jr. was married to Mary “Polly” Holcomb who smoked a pipe all the way to 97 years old.  They operated a tavern just south of Carriage Road from 1811-1826.  The story goes that Thomas walked to Ohio from Connecticut in 1801 and first spent time in Franklinton (Columbus).  He walked back to Connecticut to gather Polly and returned in 1806 to settle in Liberty Township.  The old Orange Road bridge, a 1913 flood survivor and noted historical landmark, was built on Thomas’ land and still sits next to the new bridge.

Before Powell was Powell, it was known as Hall’s Corners and Middlebury.  Thomas Hall had a general store here in 1813.  When the residents applied for a post office many years later, they had a little help from Judge Thomas W. Powell in Delaware, and in gratitude renamed the village after him.   The railroad helped the growth of Powell during the latter part of the 1800s.

The Delaware County Fairgrounds were located in Powell from 1909 to 1936.  The Murphy family purchased the land and operated the Powell Speedway and Murphy’s Party Barn for many years.  In the beginning, legends such as Joie Chitwood raced here.  The Powell Speedway is long gone and covered in condos.  The Powell Historical Society has much more information about the history of Powell specifically and is open for tours.

When was the last time you went to the Zoo?  There is still fun to be had in the winter time here, and it’s less crowded so that is always a bonus!  Plan to ride the Grand Carousel which was built in 1914 is one of only 200 left operating today.  Admission through February is half off and free on January 20th and February 17th.

Some of the cemeteries in Liberty Township are more obvious than others.  The Powell Cemetery is right in historic downtown Powell.  The Liberty Church Cemetery is at the busy intersection of S.R. 315 and Home Road.  As cemeteries go, these are both very nice, but my favorite was hidden on hilltop, mossy and beautiful, and not easy to get to.  The Thomas cemetery is maintained by the   Westchester Home Owners Association.  If all this cemetery stuff interests you, you might want to check out this guide to gravestone iconography before you go.

The George Case farm was located along Taggart Road on the east side of the river, north of Home Road.  On November 30, 1894 the Delaware Semi-Weekly Gazette published an article detailing “the discovery of a genuine volcano” in the vicinity of this farm and reported that although the eruption was new, “there is every reason to believe that it may at any moment belch forth and spend its force and strength into the atmosphere.”  Further details describe “an elevated tract of land which overshadows a ravine on the Case farm and is about 60 feet high and almost 100 feet across the top.”  Additional descriptions include emissions of gas, smoke, and oil, and incredible heat.  “The Delaware county leviathan stands there in all of its monstrosity and belches out its impurity fairly defying all force of gravity.”

The Ohio State Journal also reported that “a volcano in eruption has been discovered near Delaware and hundreds of visitors from Columbus have driven to the spot to see it cast lava and vile smelling smoke high into the air.  Surrounding trees are falling and the farmers are very much worried over the possible destruction of a township or more.”

The Ohio Geological Society even noted the event a few decades ago in their newsletter.  The nature of the geological “incident” was eventually discounted as non-volcanic, and geologists in Ohio say it’s been millions of years since Ohio has had any real volcanic activity.  What happened here in Delaware was later called a “shale bank explosion”, and was probably a mud diapir or mud volcano. Still, you have to admit this piece of Delaware County has such a wide variety of terrain.  From wetlands and meadows to caverns and cliffs, there is no doubt why this area has been dubbed part of the Ohio Heritage Corridor.

If you drive along scenic Taggart and Perry Roads, you’ll see alternating high banks and low floodplains with the occasional raging creek.  Notable creeks flowing into the Olentangy around here include Wildcat Run, McKinnie’s Run, Big Wolf Run and Lick Run.  Also fairly new to the area is the Smith Preserve at Olentangy Falls where you might see Great Blue Herons.  If you have an extra million bucks, you might consider purchasing a home in this area as well.

Further west on Home Road, you should plan for a trip to the Olentangy Indian Caverns.  Mark your calendars for April 1st when they open again after being closed for the winter.

Within the city of Powell, you’ll find several parks worth visiting.  And Liberty Township maintains a few as well, including the massive Liberty Park on Home Road.  Closer to the Scioto River, along Seldom Seen Road, you’ll find a lovely little Preservation Park called the Emily Traphagen Preserve.  Open for over ten years now, it has 1.2 miles of easily accessible and pet-friendly trails.  There is a nice play area, picnic shelter with fireplace, and really nice restrooms.

Part of the O’Shaughnessy Reservoir lies within Liberty township.  Built in 1925, it is listed on the National Register of Historic Places.  Only a small portion of Liberty Township borders the Scioto River here.  The east side of the river is dotted with picnic sites and fishing areas with great sunset views.

When you get that close to Dublin, you may as well take in the monuments to Wyandot Chief Leatherlips.  He frequently camped and hunted along the Scioto River at a place called Otter Spring.  Respected and defended by white pioneers, his legacy lives on in Liberty Township and neighboring Dublin.  In 1889 a tombstone was erected along S.R. 257 identifying the spot as the site of his execution in 1810.  Future historians would dispute this location, and the current belief is that he died at the mouth of the Olentangy Indian Caverns.  As a testament to his greatness, a huge monument exists in Scioto Park, just two miles or so over the county line along S.R. 257.

In addition to the colorful stories about Leatherlips and other Native Americans, there are archaeological sites in the township that go back even further than the early 1800’s.  The 1914 Archaeological Atlas of Ohio identifies a total of 75 earthworks found in Delaware County, and Liberty had more than any other township.  According to this account, there were 9 mounds and 2 enclosures here.

In 1977 there was a survey of the site known as Decco-1 located where the wastewater treatment center is now located.  There were three others that I couldn’t find much information on:  Taggart Road, between the road and the river; Perry Road, on Hidden Meadow Farm; and somewhere along the 315 side of the river between Home and Orange Roads.

Different reports allude to these sites, but the most comprehensive study I found was in a 2010 book by Steven Conliff that details one specific 31-acre parcel of land along the Olentangy River.  A copy is on file in the library.  Indian artifacts were long collected in Delaware and many can be found on display at the Ohio Historical Society.

If cabin fever is getting to you, bundle up and take a ride.  No need to wait until spring – there’s more to do than you think!  Safe travels ~ and keep your eyes open for volcanoes while you’re at it.