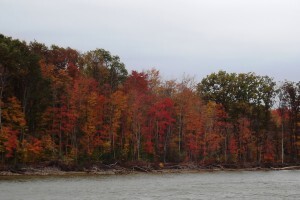 This post was originally published on DelawareO.com on October 29, 2013.

Here’s your fun fact of the day:  Delaware County has more waterfront property than any other county in Ohio!  Yes, that includes those counties up north along Lake Erie and down south along the Ohio River.  According to ODNR, the 140 miles of shoreline puts us at the head of the list and we owe it to four man-made reservoirs.  Alum Creek Lake is the newest and biggest of the four, having been completed in 1974 with 3387 acres of water.  Delaware Lake was completed in 1951 and has about 963 acres of water.  O’Shaughnessy Reservoir dates from 1925 and is the oldest and smallest with 912 acres.  In 1955 Hoover Reservoir was finished and between Delaware and Franklin Counties has about 2818 acres of water.

Before the colorful fall foliage blows away, I wanted a chance to drive the length of the lake so I headed north of Rts. 36/37 to Hogback Road.  Alum Creek originates in Morrow County, but runs 58 miles and deposits into Big Walnut Creek which then flows into the Ohio River.

The state park that has been developed around the lake is one of the best in Ohio, and the activities range from disc golf to ice fishing, and beach volleyball to cross-country skiing.  There are three different mountain biking trails, several hiking trails, many picnic spots, and 286 campsites. With 3000 feet of sandy shores, Alum Creek State Park lays claim to the largest inland beach in Ohio.  There is horseback riding to the tune of 38 miles of bridle trails and equestrians can also use the Horseman’s Campground off Howard Road.  The Howard Road boat ramp also is a great spot for fishing.

Heading south, I crossed Rts. 36/37.  Driving between Delaware and Sunbury is always a pleasure because of the views on either side of the bridge, especially this time of year.  The next time you pass by imagine driving through a covered bridge.  This area is where the town of Alum Creek was, with a post office (1838-1899), dance hall, saw mill, grist mill, distillery, school and church.  There was also the Terrace Gardens Tea Room.  Everything is gone or now underwater, except that at one time you could see remains of a building that used to house the Pee Wee Church.  (I wasn’t able to check this out on my own – your mission, if you choose to accept it!  Hint: look on the east side of Rts. 36/37. Drive safely.)

I continued down South Old State Road until I got to Cheshire Road.  The lake is divided at Cheshire Road so that power boats are on the south side, and the north side is reserved for smaller, quieter craft.  The park has a sailing association though, and the sailors and powerboats share the south end.

The main campground entrance is just south of Cheshire Road and there are 286 campsites, including a small number of cabins.  The park is open year-round for camping, but the cabins are limited to mid-April through mid-October.

As with all man-made reservoirs and beautiful parks, there is a cost.  The decision to flood this area and create the lake was a result of the Flood Control Act of 1962, and is part of a larger flood control plan for the Ohio River basin.

What’s under all that water?  Mostly farmland, but even before then, you need to look back 2000 years to the Adena Native American culture.  As part of the reservoir construction, some Adena mounds were excavated by archaeologists.  At the time white pioneers began settling in the area, the Lenape Indians were living here.   By the time Revolutionary War hero Colonel Moses Byxbe settled along Alum Creek in 1805, nearly all the Native Americans were driven off or killed.  In response to the War of 1812, Fort Cheshire was built nearby.  It later served as a schoolhouse, and survived until the Civil War.  The site of Fort Cheshire is now marked in the park’s campground area with a commemorative plaque.

The Delaware County Library’s local history room has resources that document the 2,610 graves that had to be relocated.  I would be remiss not to mention the dark side of Alum Creek’s history, which most people know about.  In 1991 and 2009, due to low water levels, some coffins surfaced.  It was quite unsettling and especially upsetting to descendants of people who were buried in those cemeteries.

After leaving the campground area, I continued south to the dog park located on the east side of Hollenback Road.  At this intersection, there used to be a town called “Rust Corners.”  As I was turning in to the park entrance, three young deer crossed in front of me and opted for the woods instead of playing with the other four-legged creatures.

The dog park is a well maintained area covering four acres which includes a beach.  There are divided areas for small and large dogs.

As you head further south, the park signs will lead the way and you’ll turn left onto Lewis Center Road.  Once you are past the housing developments and round the corner, you will see the park entrances for the beach and the U.S. Army Corps of Engineers visitor center.  Water safety, dam tours, nature hikes and movies are available.

Continuing on, you’ll find the dam area which includes a 3.2 mile walking path.  There are three access points to the pathway, but one way to get to it is by parking in the Below Dam Recreation Area and climbing about 115 steps.  There is even a Facebook group for dam stair aficionados.  After your workout, you might want to continue to Africa Road where you can recuperate by catching an air show at Dinneen Field.  For the past 25 years, the Westerville Model Aeronautics Association has leased ten acres of land from the US Army Corps of Engineers.

The area around the intersection at Lewis Center and Africa Roads is important.  Alum Creek played a significant role in the history of the Underground Railroad in Delaware County.  Approximately 40,000 slaves traveled on the Sycamore Trail along the creek on their way to freedom in Canada.  At least 30 freed slaves from North Carolina settled just south of the dam and named it Africa.  Thus Africa Road, which runs along the east side of the park, got its name from the settlement.  The cemetery was relocated by the US Army Corps of Engineers and is now behind the Berlin Presbyterian Church on South Old State Road.

Further down on Africa Road, picture the town of “Stewards Corners” that existed at the corner of Plumb and Africa Roads.  Soon you’ll be approaching the village of Cheshire, also once know as Constantia.  The village was established around 1849 on land owned by Samuel Adams (probably not the one you’re thinking of) and by 1880 there were stores, mills, churches, and even a slat window shade manufacturing plant.   There are still homes and businesses in this area, and no visit would be complete without a pizza from the Cheshire Market.  I wrapped up my visit with a pizza to go, and completed my journey by taking Africa Road to Rts. 36/37.

Interested in birding?  How about discovering rare wildflowers?  Or are you just counting the days until the annual Fantasy of Lights?  Perhaps, like me, you just appreciate getting away from the highway and taking the back way home.  Whatever your reason, head out to Alum Creek and enjoy the ride!