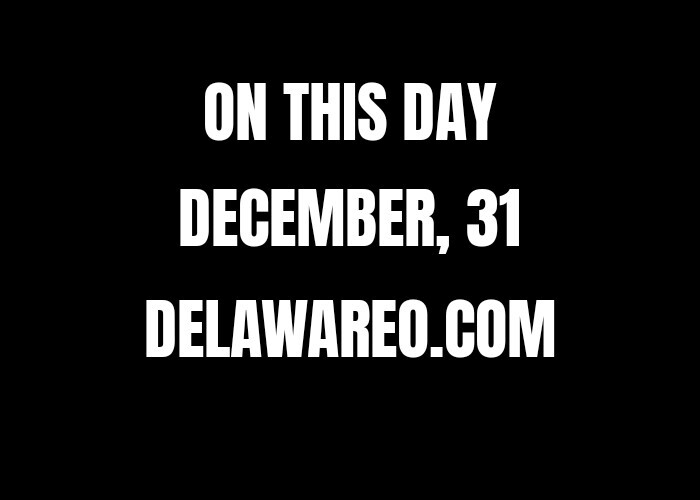 Things that happened on December 31st in Delaware, Ohio and around the world.

Well well well, it’s the last day of the year in Delaware, Ohio and we’re just hours away from bidding farewell to 2022 and welcoming in a brand new year. But don’t get too excited just yet, because we’ve still got a whole 359 days until we can start singing carols and decorating trees again. So let’s take a little break from the countdown and reminisce about all the wacky and wild things that have happened on this day in history. You never know, we might even learn something new.

192 A.D.  Roman Emperor Commodus survives poisoning attempt by his mistress only to be strangled in the bath in assassination plot.

1775 A.D. Battle of Quebec: American Continental Army led by Richard Montgomery is defeated trying to take the British stronghold of Quebec City in the American Revolutionary War, General Montgomery is killed and Benedict Arnold is injured.

1783 A.D.  Import of African slaves banned by all of the Northern US states.

1852 A.D. Rutherford and Lucy Hayes were married at Lucy’s mothers’ home in Cincinnati.

1935: Charles Darrow patents the board game Monopoly, goes on to be the 1st millionaire game designer.

1945 A.D. English musician, singer, actor, and businessman Davy Jones was born in Manchester. Best known as a member of the band the Monkees and for starring in the TV series of the same name.

1958 A.D. Cuban dictator Fulgencio Batista tells his Cabinet he is fleeing the country.

2017 A.D. Cleveland Browns crash to a 28-24 loss to Pittsburgh Steelers at Heinz Field to become only the 2nd team in NFL history to finish season with 0-16 record